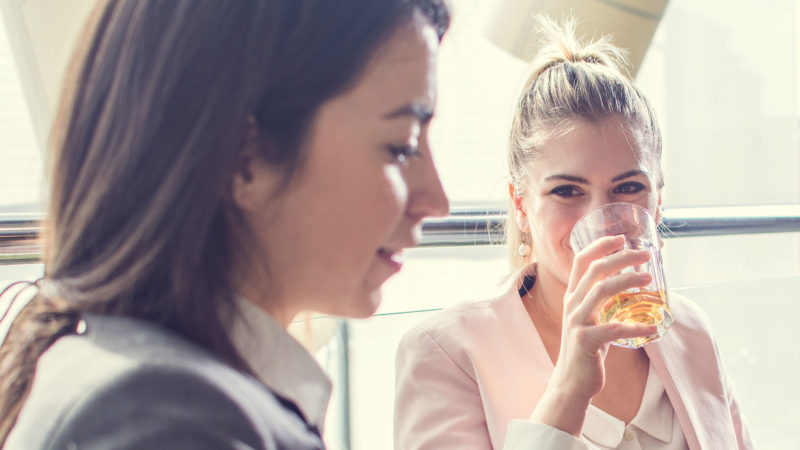 We know that managing our public self-image is critical to our careers, but too often the expectation of how we sound in our heads does not meet reality.

A new study in the Social and Personality Psychology Compass found that our biggest enemy in making a good impression is ourselves. We talk about our accomplishments and skills, not realizing that our attempt to give a favorable impression is backfiring. Instead of sounding competent and on top of things, we sound like obnoxious braggarts.
Researchers discovered that narcissism and a failure to account for the perspective of others were the repeated threads in our self-sabotaging presentation tactics. The worst part is that many of us can make these mistakes without ever realizing what’s making people back away.

In one experiment, participants were asked to speculate on what other people thought about their success story. What the participants thought went amazingly well, the bystanders were lukewarm on.

How to explain the divide? It’s all in the delivery. Where the participants wanted to play up how magical and unique their talent is, the people listening to the stories wanted the “hard work stories” participants told them to be relatable. They enjoyed the stories about how much time and effort went into our success more than the ones where we said it all came to us naturally. Put another way, people would rather hear about your guts than your glory.

What the test showed is that we can fail to take the perspective of others, at expense to ourselves. Worse, we don’t even realize we’re doing it, since at the time we’re too self-involved in our own stories. Here are four tactics to avoid so you don’t come off as an arrogant jerk.

1) Humblebragging
We place such a high value on sincerity that we prefer outright braggers to humblebraggers, researchers found.

Humblebraggers think talking about how they are such a hot mess who somehow managed to succeed makes them sound endearing. But disguising your accomplishments in a complaint or with humility makes you sound insincere; everyone knows the punchline of your story is how amazing you are.

It’s better to not conceal your intent, because when we see through an anecdote to its agenda, we react more negatively.

“Perceived insincerity is so critical for actors’ interpersonal appeal that humblebragging is less effective than simply complaining or bragging,” researchers said. “That is, both complainers and straightforward braggers are regarded as more sincere and thus more likable than humblebraggers.”

You may think this sounds like a compliment, but recipients will hear it as a strategic put-down to remind them of their place and of your superior status.

Known for being manipulative, narcissists frequently deploy these compliments to maintain superiority in the workplace, unwilling or unable to account for the feelings and perspective of others.

If you want to have a good laugh about this technique at its worst, read The Underminer: The Best Friend Who Casually Ruins Your Life . The book shares the monologue of that terrible person who always asks, “have you lost weight? You look so different! SO much better!”

As Lisa Zeidner once wrote of this technique, “You can’t escape this viper. Even if you sell all your belongings and move to New Zealand, you’ll bump into each other, get some fresh piece of bad news and be reminded of every failure in your past.”
No wonder people don’t like this behavior.

3) Hypocrisy
Hypocrites can actually skate by in public settings, using their self-enhancing lies to get ahead in the workplace. But the jig is up when people notice that they can’t back up what they boast.

Researchers found that we will judge hypocrites more harshly than individuals who did the same behavior—because we detest lying so much. So think twice before you decide to exaggerate your previous role; it’s very likely that no one is fooled — or fooled for long.

How to avoid hypocrisy? Keep your word, and back up what you brag about.

4) Hubris
We don’t react well to success stories that depend on putting someone else down. In an experiment, researchers had observers listen to an actor’s self-aggrandizing claims.
Statements that made social comparisons like “I am a better person to be friends with than others” turned us off more than non-comparison claims like “I am a good person to be friends with.”

This reaction is not because we believe in a fair and just world where everyone deserves equal treatment. Researchers believed that our reactions are a selfish, self-defense mechanism against the threat that the person with low opinions of others may have a low opinion of us.

“Observers disfavor the actor for self‐protective purposes…as they are threatened by the actor’s unfavorable view of them or gloomy perspective on their future—a state that sparks antagonism or hostility,” researchers said.